After a bleak week of some petty politics, we are finally being granted a glimmer of hope for the weekend!

The state Senate of Nevada voted to ban the “Panic Defense” in cases of violent crime against LGBTQ+ people.

Nevada is the fourth state in the nation to ban this defense. It added a much needed victory for the LGBTQ+ community. 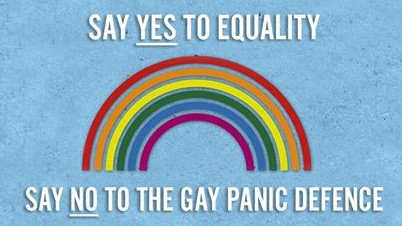 The LGBT Bar, an association of lawyers, judges and other members of the legal community working to promote justice for the LGBTQ+ community, defines the “Panic Defense” as:

“A legal strategy which asks a jury to find that a victim’s sexual orientation or gender identity is to blame for the defendant’s violent reaction, including murder.”

The organization goes on further to describe the defense helps perpetrators get away with their crimes through three methods.

“Defense of insanity or diminished capacity: The defendant alleges that a sexual proposition by the victim – due to their sexual orientation or gender identity – triggered a nervous breakdown in the defendant, causing a gay or transgender ‘panic.’ “

“Defense of self-defense: Defendants claim they believed that the victim, because of their sexual orientation or gender identity/expression, was about to cause the defendant serious bodily harm.”

But, now that this decision has been passed by the state, these defenses are no longer considered valid.

Those who commit violence against the LGBTQ+ community now must face consequences for their actions.

This has been met with very positive responses by LGBTQ+ ally groups and the social media community.

While Brooke Maylath of the Transgender Allies Group was quoted saying:

“In a different world, if women were to respond that way, there wouldn’t be a man alive. It’s a vile and disgusting defense that sends a message to the community that homosexual and transgender people are subhuman, and it’s perfectly OK to be incensed and go into a murderous rage.”

Briana Escamilla was also found on twitter rejoicing in both this victory and the Equality Act passed by the House.

Needless to say, these wins for the LGBTQ+ community were very much needed after such a harrowing week of political regression. Maybe we can be hopeful that we’ve seen the darkest of the dark, and we will be able to move onward and upward from here.

But no matter what, we should all be thankful that we have taken another step closer to equality and towards widespread acceptance of our loved ones.

Brian DiRito is a former actor, singer, dancer, musician turned app developer. Having spent most of his life completely immersed in the arts, he now finds ways to bridge the gap between art and technology by combing both fields to assist one another. Now that he has journeyed into the world of technology, Brian also seeks to aid in the fight for equality and improve the quality of life by working with nonprofit tech companies and creating apps to help those in search of help.