The federal government has been partially shut down by President Donald Trump for almost a month now. Furloughed workers and those forced to work without pay are under copious amounts of stress, attempting to feed themselves and their families and find enough extra cash to cover rent and bills.

Hundreds of thousands of federal employees are being forced to return to work without any sort of payment or compensation. Local businesses across the country are giving unpaid government employees free meals as a means to help them through this tough time.

Add to them all the government contractors not working because of the shutdown President Trump said he would be “proud” to create and that’s a lot of people out of work.

So, how are these federal employees and contractors coping with all the stress?

The adult video website reported traffic has shown an average daily increase of almost 6% during the third week of the shutdown, January 7th. 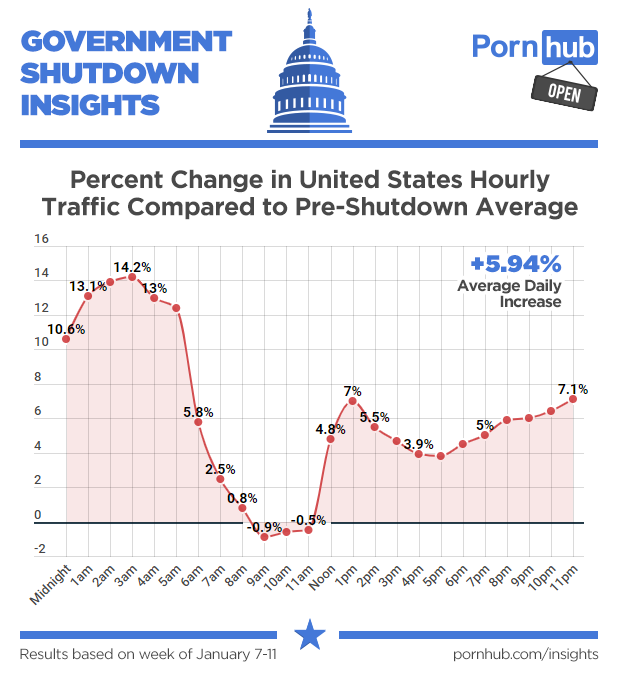 As depicted in the chart above, the popular adult video platform has seen a spike in late-night traffic and a spike in the afternoon.

Often times, increases during these hours can be attributed to winter storms and holidays, as they mean people won’t have to go into work the following morning, and therefore don’t feel bad about staying up late and, erm, entertaining themselves.

“Those fluctuations are similar to other events when people tend to stay up later and sleep in when they don’t have to go to work in the morning.”

While the peak time remains around 1 a.m. unlike the national average, the folks in D.C. seem to be watching more around 10 p.m. 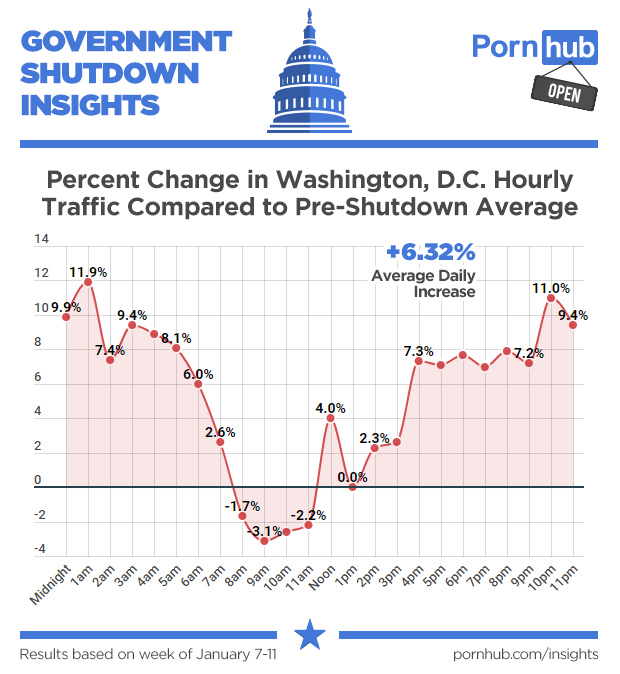 Now, of course it is the middle of winter and around this time, people tend to cozy up inside more often and avoid the cold. But still, given the timing it is difficult to deny a steadied correlation here.

“Further indicating that some people have a bit more time with on their hands.”

People thought the correlation was hilarious:

Considering all of the stress these government workers are under right now, some aren’t surprised at the sudden spike:

What yall want em to do?! Stress of unpaid bills is a muthaeffa

Government screwed them might as well watch someone else get screwed

800,000 furloughed federal workers ain’t got shit else to do.

After all, gotta fill the time somehow. Right?

Good way to spend your free time when you’re broke I guess….

People came in with the puns:

And some were quick to credit themselves:

Come on now, guys. Don’t take credit for a proud accomplishment from the government!

I’m responsible for 5% of that

No word as to when President Trump’s government shutdown is going to cease and employees are going to be paid again, but in the meantime, at least they found a way to bide the time.